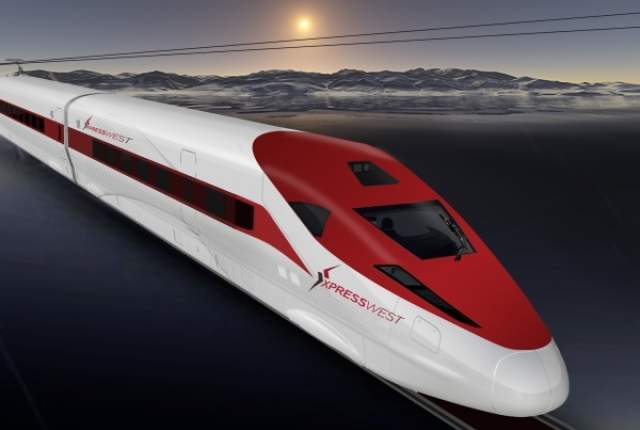 Construction on the XpressWest line could begin in about a year, in September 2016, according to Thursday’s announcement.

The 230-mile line would have a station in Las Vegas and two in California, in Victorville and Palmdale.

It’s not the first time, however, that construction plans have been announced. In early 2010, then-Desert Express announced it would break ground later that year. In 2012 the name was changed to XpressWest and officials announced the link to Palmdale, Calif., where the line would connect with California High Speed Rail System.

Officials with XpressWest and the Marnell Cos., which oversees it, declined to make anyone available Thursday to answer questions. An executive assistant with XpressWest, Ray Tao, said they will release more information “after obtaining additional required regulatory approvals.”

The deal also was announced at a news conference in Beijing, with officials touting it as the first significant Chinese-American high-speed rail partnership, Bloomberg News reported.

The deal followed four years of talks, according to Bloomberg.

Gov. Brian Sandoval, who was in Las Vegas on Thursday to conduct an Office of Economic Development meeting, said he had heard about the Chinese investment but hadn’t been apprised of any additional details.

He recently appointed five members to a new Nevada High-Speed Rail Authority, which will be responsible for selecting a franchisee to develop a system linking Las Vegas with Southern California. The authority board has yet to meet, but it’s widely expected that XpressWest will be selected. Board members either couldn’t be reached or declined comment Thursday.

Las Vegas hasn’t had regular passenger train service since 1997, when Amtrak stopped its Desert Wind route. With millions of Californians making the trek here by car and plane every year, the potential market for a cross-border train could be huge.

Initial plans called for terminating the route at Victorville, far from Southern California’s population centers. But the current proposal, to push on to Palmdale, would link XpressWest into the California High-Speed Rail Authority’s planned 800-mile system of 220-mph trains serving 24 population centers, including San Francisco, the Los Angeles basin, Sacramento and San Diego.

The Las Vegas line has run into roadblocks, however, in part because of the multibillion-dollar cost and the complexity of environmental reviews.

“Senator Reid has been a cheerleader on this project for many years,” Reid spokeswoman Kristen Orthman said Thursday. “He’s glad to see this progress and remains committed to assisting as needed.”

Jonas Peterson, CEO of the Las Vegas Global Economic Alliance, a nonprofit organization that drives economic development in Southern Nevada, said a high-speed rail system would be a boon to Las Vegas.

“Anytime we can connect directly with a region like Southern California, it pays huge dividends for us,” Peterson said Thursday. “It would be an incredible leap forward for us.”

Review-Journal writer Richard N. Velotta contributed to this report. Contact Eric Hartley at ehartley@reviewjournal.com or 702-550-9229. Find him on Twitter: @ethartley.