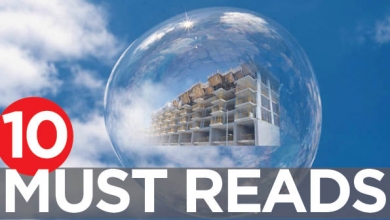 U.S. Real Estate 25% to 60% Overvalued: Analyst “Nearly a decade after the peak of the American real estate bubble, there’s no shortage of fear that we’ll repeat the whole nightmare again. For years now, economy watchers have fretted over the run up in student loan debt, while more recently the collapse in junk bond prices had analysts drawing parallels to what happened in the subprime mortgage market in 2008. But what if the next crisis isn’t just similar to the last one, but a word-for-word rip-off?” (Fortune)
Kohl’s Considers Going Private “Department stores have been under siege for decades, but lately their fortunes have hit a new low that could spark a wave of deal making that could sweep up companies such as Kohl’s Corp. Kohl’s KSS, a national department-store chain with roughly 1,200 stores, is debating whether to pursue more drastic action, such as taking itself private or breaking up the company, according to a person familiar with the situation. The discussions are preliminary and directors might opt not to explore such a strategy.” (MarketWatch)
Is 2016 the Year of the Next Recession? “Does the New Year’s market slide presage recession in 2016? That’ll be the chatter of this week, as analysts try to make sense of the wreckage. The majority of economists don’t see recession in the cards. But the majority of economists are usually wrong. So let’s tally the tea leaves.” (Fortune)
Apartment Vacancies Rise for the First Time in Six Years: Why? “Bozzuto admits he is concerned that so much of the new development is in luxury projects. Millennials and downsizing baby boomers alike demand the latest and greatest amenities, but there are a limited number of them who can afford all the bells and whistles. Job growth has been improving, but income growth has not.” (CNBC)
Retailer Joyce Leslie Files for Chapter 11 Bankruptcy “Joyce Leslie, a 69-year-old women’s clothing retailer with 47 stores in the New York metropolitan area, has filed for Chapter 11 reorganization. The company lacks a “sophisticated e-commerce platform” to compete in today’s market, it said in court papers. The family owned business opened in 1947 by Julius Gewirtz and his wife, Hermine.” (New York Post)
Midtown Manhattan Office Vacancies to Rise as Large Spaces Empty “Midtown Manhattan, once the pinnacle of U.S. office markets, is facing a jump in large, empty work spaces as new towers open and tenants spread out across the city, including outer boroughs that businesses once shunned. By 2017, about 21 million square feet (1.2 million square meters) of Midtown’s Class A offices, or about 14 percent of the market, will probably be available, Keith DeCoster, director of U.S. real estate analytics for brokerage Savills Studley Inc., estimated.” (Bloomberg)
Who Would Foot the Bill for Cuomo’s Javits Center Plan? “Gov. Andrew Cuomo’s announcement last week of a planned $1 billion expansion of the Jacob K. Javits Convention Center on Manhattan’s West Side promised jobs and economic activity, but neglected to mention how it will be funded. And the debt on a previous renovation is not scheduled to be retired for another 30 years. The 1.2 million-square-foot expansion would likely bump Javits well into the nation’s top 10 convention centers by size.” (Crain’s New York Business)
The Apartment Bubble Myth “Bubbles are difficult to spot a priori because it’s difficult to determine intrinsic value on a real-time basis. Therefore, it’s usually after the fact that it becomes apparent a bubble existed, and that’s why many people today incorrectly believe the apartment market is in a bubble. However, a careful examination of the current market relative to the last bubble will demonstrate that there is no bubble today.” (Multifamily Executive)
Why Verizon’s 48 Data Center Portfolio Will Likely be Broken Up “For starters, Verizon has many more data center assets than 48, Rick Drescher, managing director of Technical Services at Savills Studley, tells GlobeSt.com. Which ones it plans to include in the portfolio is an open question, he says. ‘Data centers can become obsolete very quickly. I would guess that most of the assets Verizon is planning to market are not the kind of assets that a company like, say, Digital Realty would want.’” (GlobeSt.)
Real Estate Fundamentals in “Great Shape,” Says Analyst “Chris Lucas, a REIT analyst and senior managing director at Capital One, joined REIT.com for a video interview at REITWorld 2015: NAREIT’s Annual Convention for All Things REIT at the Wynn Las Vegas. Real estate fundamentals are in ‘great shape,’ according to Lucas: New development is under control, and demand remains fairly consistent across all the property types.” (REIT.com)